What we learned at the One Planet Summit

What we learned at the One Planet Summit 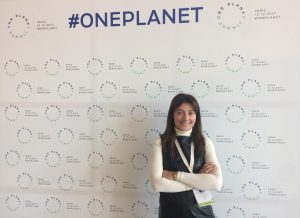 On Tuesday the 12th of December, Eurosif attended the One Planet Summit - a gathering in Paris, two years on from the Paris Agreement. Convened by the French President, Emmanuel Macron,  over 50 heads of state came together for a status update on the fight against climate change.

Naturally, the Summit was considered the perfect platform to launch a spate of initiatives and commitments - a selection of which can be found below:

Sustainable Finance Facilities: UN Environment and BNP Paribas sign a milestone agreement to establish collaborative partnerships with a target of capital funding amounting to USD 10 billion by 2025 in developing countries:

Climate Action 100+: 225 investors with more than USD 26.3 trillion assets under management to engage with 100+ companies to accelerate climate action:

UN Women: Initiative to boost resilience of women and youth in the Sahel through climate-smart agriculture will transform livelihoods of a million people by doubling their income in three years:

Task Force on Climate-related Financial Disclosures (TCFD): Two hundred thirty-seven companies with a combined market capitalization of over $6.3 trillion have publicly committed to support the TCFD:

Canada and World Bank Partnership to support effective climate action in developing countries in support of the Paris Agreement:

AXA accelerates its commitment to fight climate change: multiplying green investments fourfold to Euro 12 billion by 2020; and committing to over Euro 3 billion of additional divestments from carbon-intensive energy producers:

The World Bank to no longer finance upstream oil and gas projects after 2019:

Financial Disclosure in China: “By 2020 every listed company in China must disclose information on environmental impacts”:

Shareholders Resolutions: Exxon has bowed to shareholders’ demands to provide details on climate-change impact to its business:

One Planet Charter: ICLEI, Global Covenant of Mayors, and C40 announce to charter to accelerate Local Implementation of the Paris Agreement:

Urban 20 (U20): C40 Cities launch U20 initiative to raise the profile of urban issues and enhance the role of cities in the G20 agenda:

Research on health benefits of climate action in Paris holds lessons for cities worldwide: such yaction adds 3 weeks to average life expectancy for every citizen of Paris and could prevent 45,000 premature deaths globally each year:

UNIDO has mobilized US$849m to protect the ozone layer and reduce global warming: